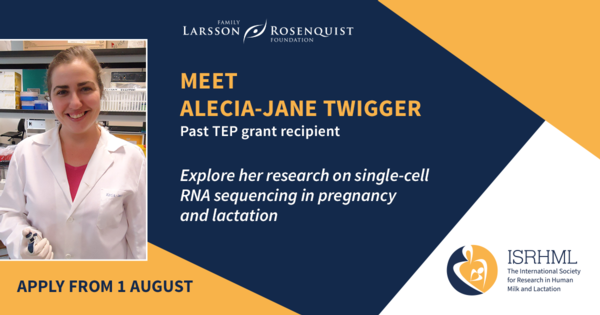 Past TEP grant recipient Alecia-Jane Twigger, PhD, BSc (Hons), currently a postdoctoral research associate at the University of Cambridge, England, United Kingdom, received a Trainee Bridge Fund (TBF) grant in 2017. The grant enabled her to further her cellular research in human lactation. During her project, which was completed at Helmholtz Zentrum München, Dr. Twigger learned to cultivate three-dimensional organoids from resting breast cells and process them for confocal imaging. She also learned to prepare and sort those cells using fluorescence activated cell sorting (FACS).

About her research, Dr. Twigger said:

“Interestingly the FACS profiles of the milk cells are very different to the resting breast cells, despite their ability to generate organoids. Moving forward it will be important to determine novel surface markers for the milk cells that will enable us to discern the population of cells producing milk (lactocytes) and the cells that are able to generate organoids in culture.”

Through her TBF-enabled journey, Dr. Twigger was able to significantly expand her research knowledge and laboratory proficiency. It is clear from her record of published studies that she has continued to utilize the skills she developed in further human lactation research.

Some of Dr. Twigger’s TBF-enabled work is reflected in these two studies:

Transcriptional changes in the mammary gland during lactation revealed by single cell sequencing of cells from human milk, obtained from bioRxiv

If you are an early career researcher with a focus on human milk and lactation like Dr. Alecia-Jane Twigger, consider applying for a Trainee Expansion Program grant when applications open 1 August 2022.

This website uses cookies to improve your experience while you navigate through the website. Out of these, the cookies that are categorized as necessary are stored on your browser as they are essential for the working of basic functionalities of the website. We also use third-party cookies that help us analyze and understand how you use this website. These cookies will be stored in your browser only with your consent. You also have the option to opt-out of these cookies. But opting out of some of these cookies may affect your browsing experience.
Necessary Always Enabled
Necessary cookies are absolutely essential for the website to function properly. These cookies ensure basic functionalities and security features of the website, anonymously.
Functional
Functional cookies help to perform certain functionalities like sharing the content of the website on social media platforms, collect feedbacks, and other third-party features.
Performance
Performance cookies are used to understand and analyze the key performance indexes of the website which helps in delivering a better user experience for the visitors.
Analytics
Analytical cookies are used to understand how visitors interact with the website. These cookies help provide information on metrics the number of visitors, bounce rate, traffic source, etc.
Advertisement
Advertisement cookies are used to provide visitors with relevant ads and marketing campaigns. These cookies track visitors across websites and collect information to provide customized ads.
Others
Other uncategorized cookies are those that are being analyzed and have not been classified into a category as yet.
SAVE & ACCEPT